THANK YOU TO OUR AUDIENCE, CAST, CREW AND CABARET AMBASSADORS FOR MAKING CABARET COMICO 2015 A SUCCESS!

November 2015 saw Year Three of the cultural exchange dedicated to  original comic song, in the style of cabaret inspired by New Performance Group’s Italian partners at the Festival of the Shaman and the Showman,Vallecamonica, Italy. We are grateful for the support of the Italian Cultural Institute of San Francisco and the Italian Consul General.

Cabaret Comico: A Salute to the Comic Singer & Songwriter: Original comic songs and Broadway musical comedy numbers performed by some of the Bay Area’s funniest singers and songwriters. Taking Our Laughter Seriously: a portion of the proceeds have been donated to UNCHR U.N. REFUGEE AGENCY.

OUR SECOND EVENT: THE SONGWRITER’S SHOWCASE

Cabaret Comico presented a Songwriter’s Showcase and Organic Dinner on Sunday, November 15 at North Beach’s intimate cabaret and world music club, Peña Pachamama, in collaboration with Lauralee Brown of the West Coast Songwriters Organization. And for the first time, in 2015 we welcomed visitors from the Shaman to Showman Festival to our audience, so we invited songwriters and public to come listen and dine all together for a truly international artistic and cultural experience.  Sunday, November 15 at 4:00pm, Peña Pachamama, 1630 Powell Street, San Francisco, CA 94133 –  Songwriter’s Showcase and Organic Dinner

HISTORY – Year One and Year Two of the project 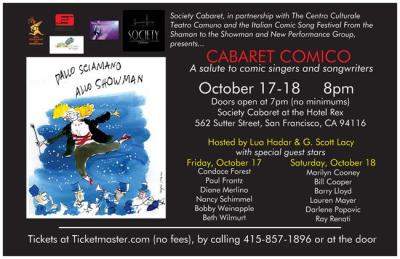 OCTOBER 2014 PRESS RELEASE:  San Francisco’s version of Italy’s comic cabaret festival, From the Shaman to the Showman, returns this year with double the fun. Society Cabaret presents two different nights of the Bay Area’s funniest singers and songwriters performing original songs and comic numbers from musical theater in the 2014 edition of Cabaret Comico: A Salute to Comic Singers and Songwriters, hosted by G. Scott Lacy and Lua Hadar. The word ‘comic’ is key here; in Italy all cabaret is comic.

Since 1987 Lua Hadar’s New Performance Group has maintained a cultural dialogue and collaboration with Nini Giacomelli’s Centro Culturale Teatro Camuno. As co-producer and co-host of the San Francisco cabaret event, Lua says, “I’m thrilled that after the years of success this Italian festival has experienced, we have been able to create a cultural partnership through Society Cabaret which offers two fresh and funny evenings by local entertainers, designed to tickle San Francisco’s funny bone. Victor Borge said, ‘Laughter is the shortest distance between two people.’ When the audience laughs together, we can feel our common humanity. We need that.”
Special Guest Stars: Candace Forest, Paul Frantz, Diane Merlino, Nancy Schimmel, and Bobby Weinapple, Beth Wilmurt, Marilyn Cooney, Bill Cooper, Barry Lloyd, Lauren Mayer, and Ray Renati.

VIDEO from the first edition of Cabaret Comico, 2013:

October 26, 2013 marked Chapter One of an international cultural exchange for the production of Cabaret Comico, a partnership of San Francisco’s Society Cabaret and New Performance Group with the Italian Centro Culturale Teatro Camuno, and their Festival Dallo Sciamano allo Showman (From the Shaman to the Showman), the cabaret festival of original comic songs and songwriters.

Now in it’s 13th year in Italy’s Valle Camonica, Dallo Sciamano allo Showman is a co-production of Centro Culturale Teatro Camuno and the renowned festival of original song and songwriters, Club Tenco. Featuring many stars as well as emerging artists, it has been covered by Italian National Television RAI. The Valle Camonica, in the Lombardy Region of northern Italy, boasts a UNESCO site of prehistoric rock carvings, which have greatly influenced local artists and scholars, among them festival producer Nini Giacomelli and her creative team, who see the performer as a kind of shaman, healing the audience through laughter. Hear Nini tell about it and show you the prehistoric site:

Lua Hadar’s New Performance Group is dedicated to deepening intercultural communication through the performing arts, arts education and cultural exchange with the goal to bring an awareness of our common humanity to audiences and participants. New Performance Group has produced classes, performances, CDs, community events, international exchange and a DVD in its 20-year history. Nominated for an Independent Music Award, Lua Hadar is a vocalist, emcee and indie producer with a long history of performing both abroad (Italy, France, Thailand and more) and in New York and San Francisco, including at Yoshi’s Jazz Club and at legendary North Beach music venues such as The Purple Onion, Peña Pachamama, Caffé Trieste and Jazz at Pearl’s.